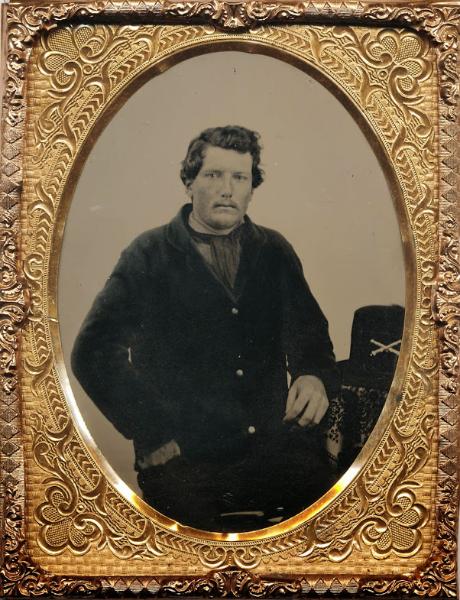 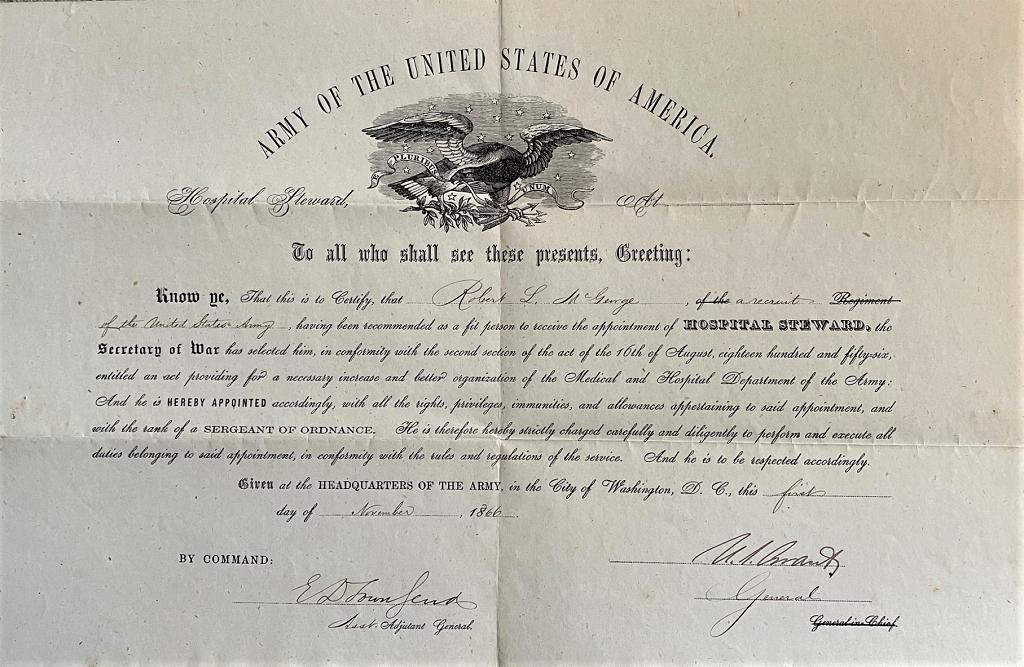 U.S. Grant Hospital Steward DS A very rare version of Grant's signature on a very rare Hospital Steward appointment. Dated November 1866, just a few months earlier Grant had been promoted to the newly created rank of General of the Army of the United States.

For both the Army and the Medical Department, the return to peacetime size was rapid. Although the demands of Reconstruction and the need to discourage the spread of French ambitions in Mexico delayed total demobilization for a few months, the million wartime volunteers of May 1865 had become 11,000 by November 1866. Few even of that number remained after the fall of 1867. Since the war left much of the nation convinced that large-scale conflict was for the United States a thing of the past, Congress reduced the number of regular troops as well, from 54,000 in 1867 to 26,000 in the late 1870s, when Reconstruction came to an end.

During the year after the Civil War ended, much of the Medical Department's time was devoted to processing departing medical personnel, to settling their accounts, and to closing facilities. Most of the doctors leaving the Army by the end of 1866 were volunteers, who were mustered out on an individual basis as soon as their services were no longer needed. The department reduced the number of contract surgeons to 1,997 by July 1865, to 262 a year later, and to 187 by 1870. Twelve regulars resigned soon after the end of the war, and six more died within the year. The hospital chaplains attached to wartime hospitals were dismissed as these facilities were closed. With the departure of the victims of that conflict, the department closed all general hospitals. The office of superintendent of women nurses was also abolished in the fall of 1865, when all female nurses were discharged.

Of the 65,000 patients in general hospitals in June 1865, only 97 remained a year later. The rapid decrease in the number of patients led to a corresponding decrease in the amount of medicines and supplies needed for their care and in the number of facilities designed to shelter them. Surgeon General Barnes was called upon to disband the ambulance corps; to close supply depots; and to sell or otherwise dispose of hospital transports, hospital trains, and general hospitals. Some institutions were turned over to individual states for use as homes for wounded veterans, and others were returned to their original owners. By the end of the fiscal year 1866 the Medical Department had received more than four million dollars from the "sales of old or surplus medical and hospital Property." By the summer of 1866 only the depots at New York, Philadelphia, St. Louis, New Orleans, San Francisco, and Washington, D.C., remained open.