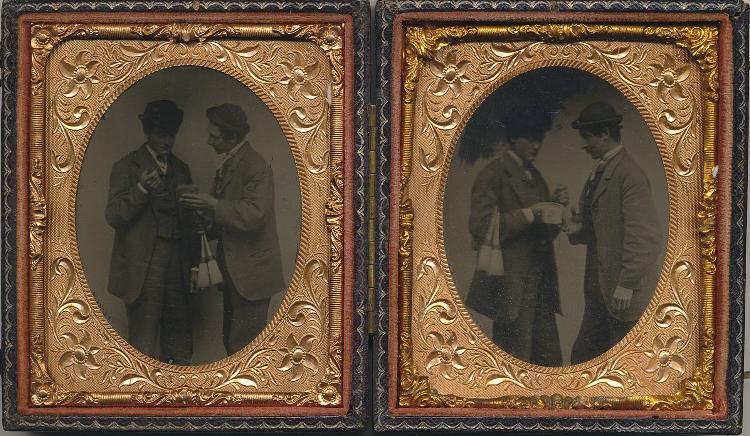 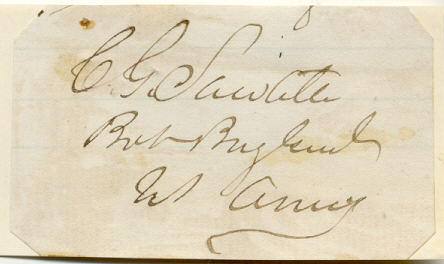 Click on an image to enlarge
CS- signed with rank 3 ½”" x 1 ¾" "C.G. Sawtelle Bvt Brig Genl US Army”
Charles G. Sawtelle received an appointment to the United States Military Academy at 16. Graduating in 1854, he was brevetted Second Lieutenant of Infantry and sent to the northwestern frontier to begin his service in the Sioux expedition of 1854-55. He was commissioned second lieutenant of the Sixth Infantry on March 3, 1855, and promoted to First Lieutenant five years later. During these years his duties kept him in the West, in Minnesota, Dakota, Kansas, Utah, California, and Arizona. After February 15, 1857, he served as regimental quartermaster and for a few months, as acting regimental adjutant.

Transferred East in 1861, he was appointed captain and assistant quartermaster in the Department on May 17. At first he was stationed for several months at
Perryville, Maryland, where, at the direction of General George B. McClellan, he organized a new depot on the Susquehanna. He took an active part in
the Virginia Peninsular Campaign, disembarking and forwarding troops and supplies for the Army of the Potomac in succession from Fort Monroe, the White House on the Pamunky River, and Harrison's Landing. Between September 7 and November 12, 1862, as acting Chief Quartermaster of the Army of the Potomac he supervised the forwarding of supplies from Washington during the Maryland Campaign. Appointed Lieutenant Colonel of Volunteers on November 12, he served as Chief Quartermaster of the 2nd Corps until the following January 24, when he became Chief Quartermaster of the Cavalry Corps, Army of the Potomac. He participated in Stoneman's Raid toward Richmond in May 1863. He then helped forward supplies from Washington and Alexandria for use in the Gettysburg campaign. At the request of Major General George Stoneman, Chief of Cavalry; be was stationed in Washington as Chief Quartermaster of the Cavalry Bureau from August
1863 to February 1864.

In that month Sawtelle was transferred to the West and until the end of April was Chief Quartermaster at Brownsville, Texas. The following month he moved
"with transports and supplies to meet the army of Major General Nathaniel P. Banks which was then returning from the Red River campaign. They met at
the Atchafalaya where Sawtelle constructed a bridge 900 feet across the river, using 21 large steamers as pontoons. After remaining a few weeks in charge of
steam transportation in the Department of the Gulf, he was appointed Chief Quartermaster of the Military Division of West Mississippi, an office he retained for about a year. He was engaged in forwarding troops and supplies for the Mobile campaign and the expedition that terminated in the surrender of the
Confederate forces under Major General Richard Taylor. In the meantime, on May 25, 1865, Sawtelle was promoted to Colonel of Volunteers. For faithful
and meritorious services during the war, he was brevetted Major, Lieutenant Colonel, Colonel, and Brigadier General, U. S. Army.