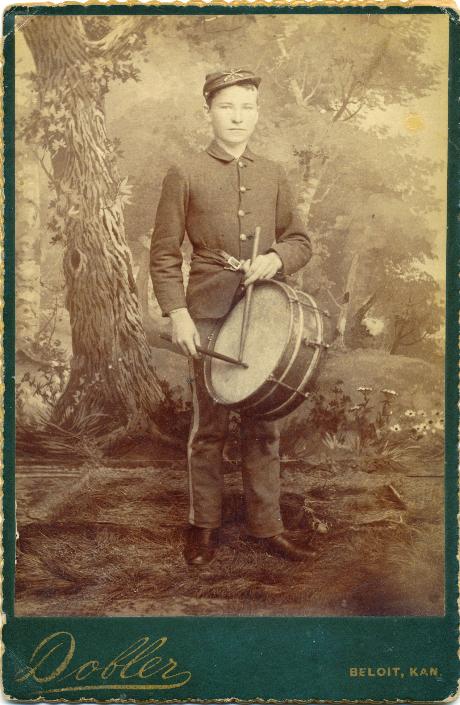 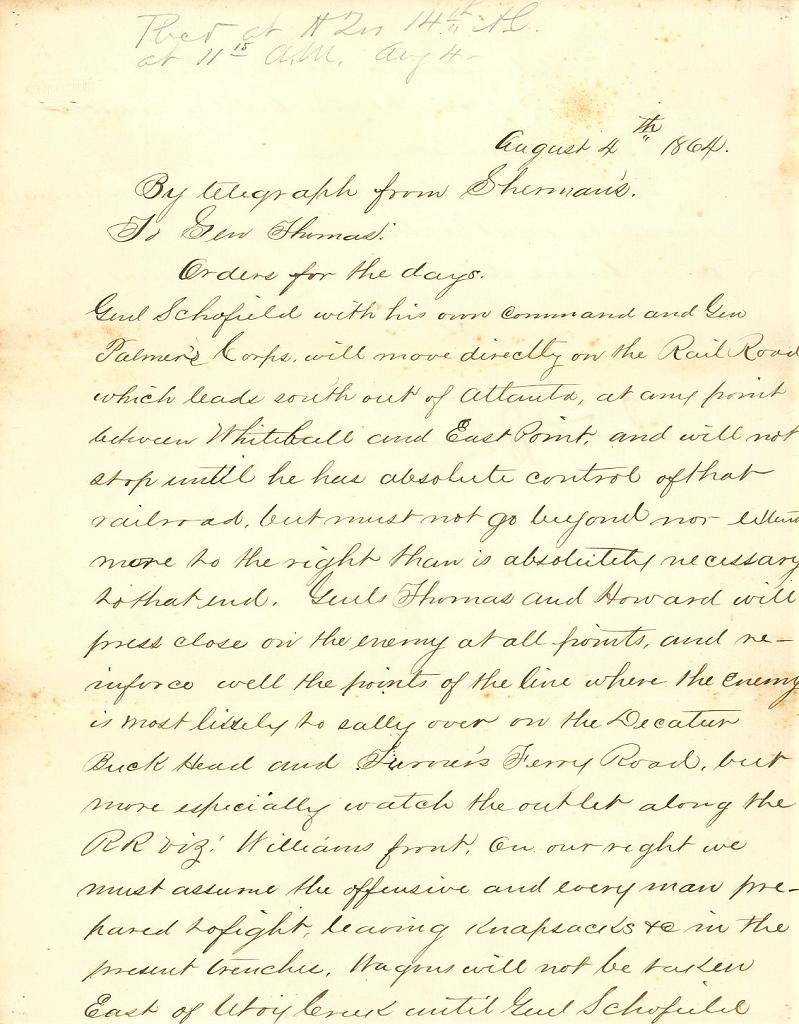 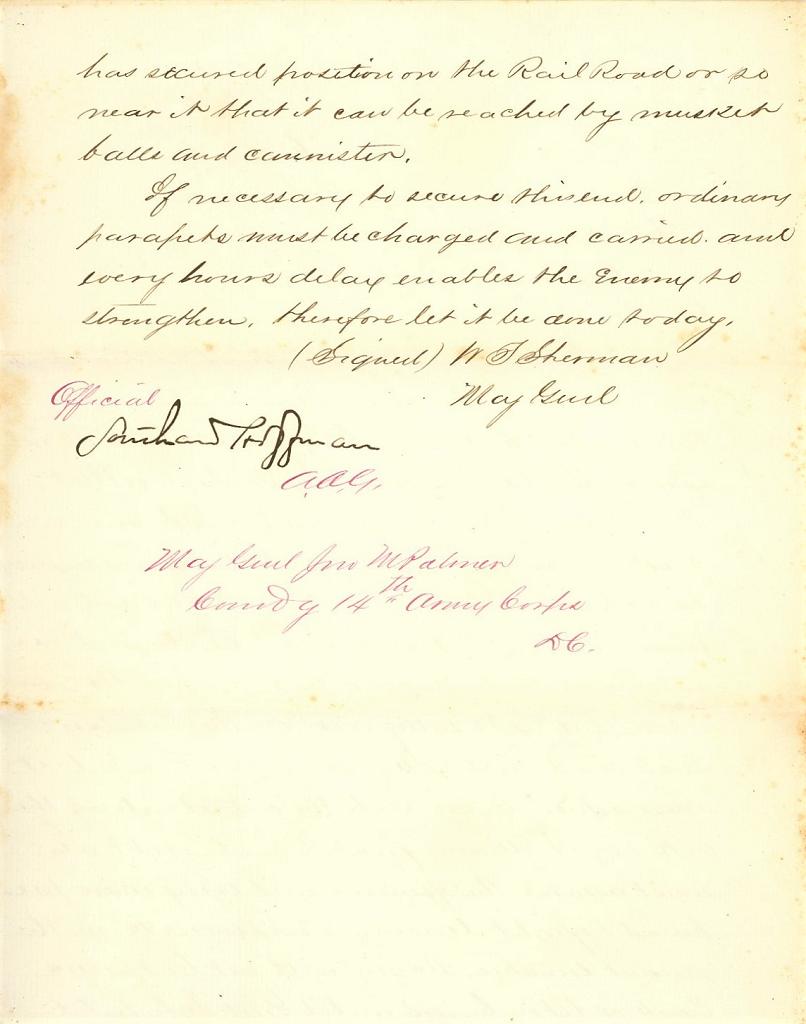 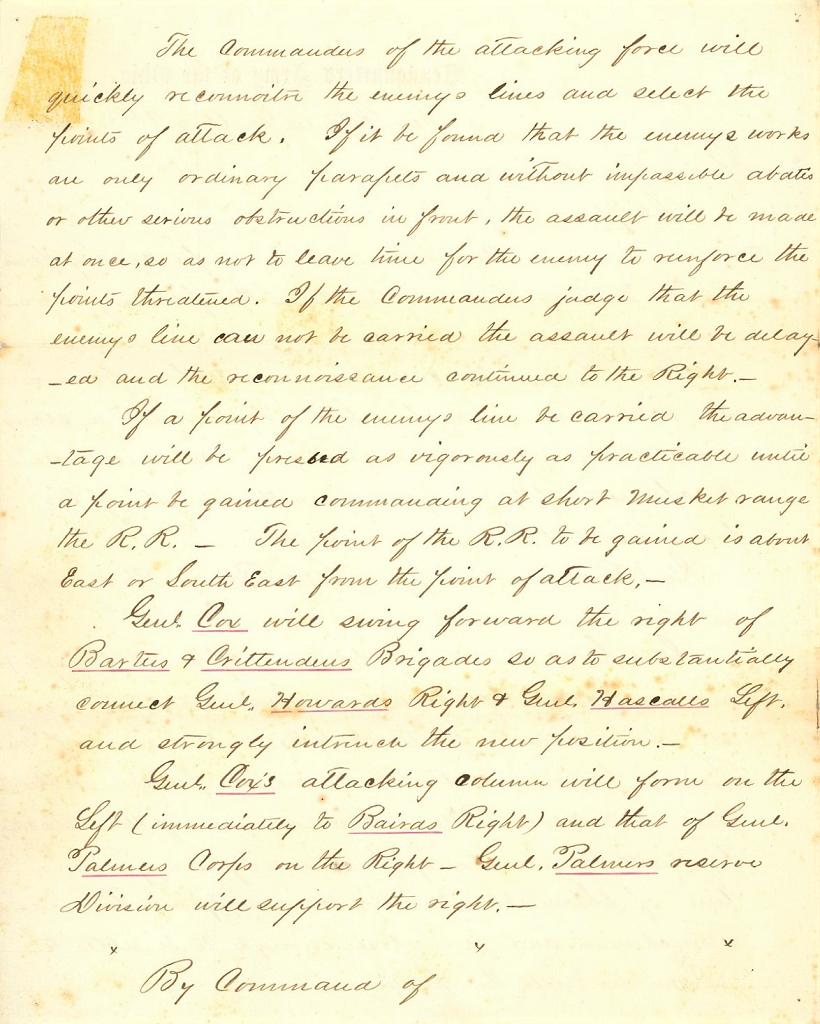 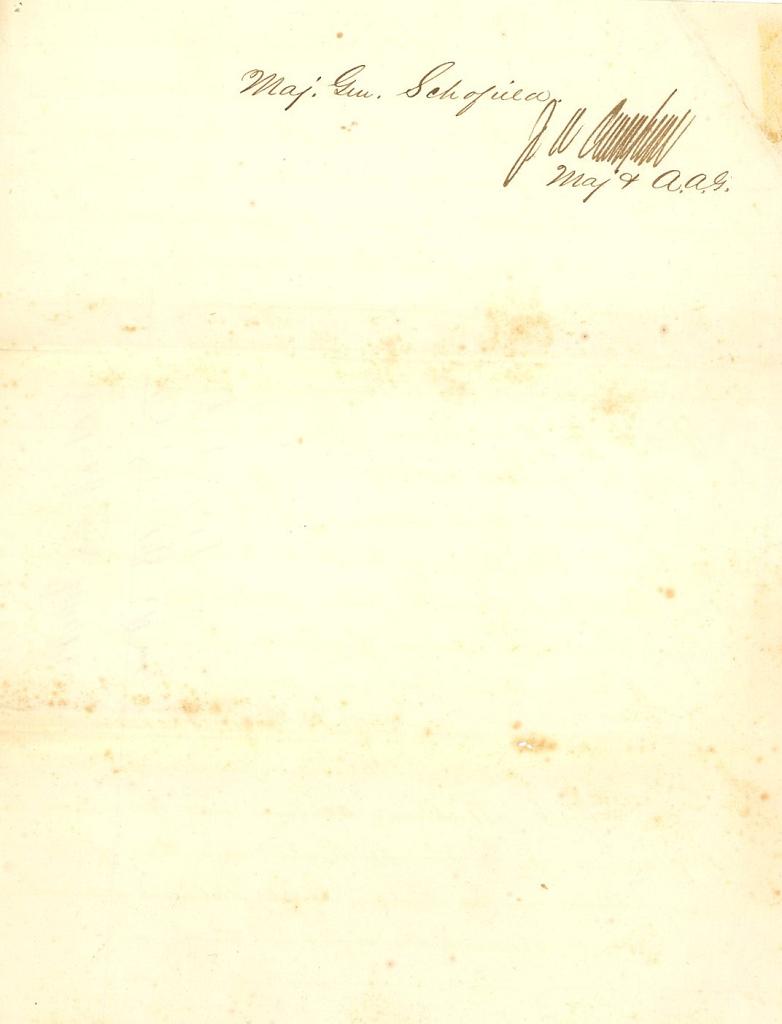 Click on an image to enlarge
Seige of Atlanta :Battle of Utoy Creek Maj. Gen. William T. Sherman's Union armies had partially encircled the city of Atlanta, Georgia, which was being held by Confederate forces under the command of General John Bell Hood. Sherman had at this point adopted a strategy of attacking the railroad lines into Atlanta, hoping to cut off his enemies' supplies. This was the third direct attack on Confederate positions during the campaign and the effect of success would have ended the siege and won Atlanta on 6 August 1864. These are original orders from Sherman and Schofield. They caused quite as stir as General Palmer believed he was Schofield’s superior and let Sherman know about it in no uncertain terms. Read the links to learn more. These are Palmers copies and are not signed by the generals.

Headquarters Army of the Ohio
near Atlanta Ga. August 4, 1864
Special Field Orders number 71
To carry out the orders for the day from HdQrs. Military Division of the Miss. - the following movements will be made. Gen’l Baird’s and Haskell‘s divisions will press forward close to the enemies works from left to right, make a strong and continuous demonstration, and even attack in case the character of the enemies works or the strength of his force indicate that they can be carried. General Palmer will support General Baird’s right with one division in reserve. General Cox’s division - 3 brigades - of the 23rd Army Corps and one Division of General Palmer’s Corps will be formed into strong columns of attack to the right and rear of General Baird, prepared to attack the enemy’s position in their front at 2:00 PM. The advance of the attacking force will be immediately preceded by a very strong
line of skirmishers, to drive the enemy into his entrenchments and press close enough to be able to reconnoiter well the position.
The commanders of the attacking force will quickly reconnoiter the enemies lines and select the points of attack. If it be found that the enemies works are only ordinary parapets and without impassable abates or other serious obstructions in front, the assault will be made at once, so as not to leave time for the enemy to reinforce the points threatened. If the commanders judge that the enemy’s line cannot be carried the assault will be delayed and the reconnaissance continued to the right.

If a point of the enemies line be carried the advantage will be pressed as vigorously as practicable until a point be gained commanding at short musket range the R.R. The first of the R.R. to be gained is about east or southeast from the point of attack.

General Cox will swing forward the right of Baxters and Crittenden’s Brigades so as to substantially connect General Howard’s right and General Haskell’s left and
strongly entrenched the new position.

General Cox’s attacking column will form on the left (immediately to Bairds right) and that of General Palmer’s Corps on the right. General Palmers Reserve Division will support the right. By command of Major General Schofield Signed by J.A. Campbell Mag & A.A.G

August 4, 1864
By telegraph from Shermans
to General Thomas
Order for the days
General Schofield with his own command and General Palmer’s Corps will move directly on the railroad which leads south out of Atlanta, at any point between
Whitehall and East point and will not stop until he has absolute control of that railroad, but must not go beyond nor extend more to the right than is absolutely
necessary to that end. Generals Thomas and Howard will press close on the enemy on all points, and reinforce well the points of the line where the enemy is most likely to rally over on the Decatur Buck Head and Turners Ferry Road, but more especially watch the outlet along the RR viz: Williams front. On our right we must assume the offensive and every man prepared to fight, leaving knapsacks etc. in the present trenches. Wagons will not be taken east Utoy Creek until General Schofield has secured position on the railroad or so near it that it can be reached by musketballs and canister. If necessary to secure this end, ordinary Parapets must be charged and carried and every hours delay enables the enemy to strengthen, therefore let it be done today
(signed) WT Sherman Major General Signed by Southard Hoffman as AAG Maj Genereal Jno M. Plamer Comd’g 14th