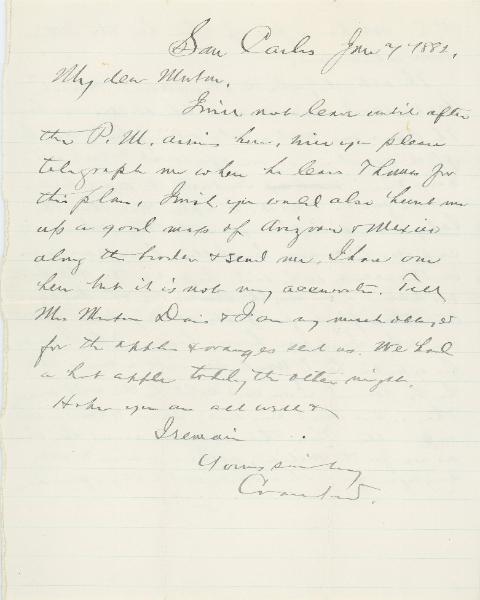 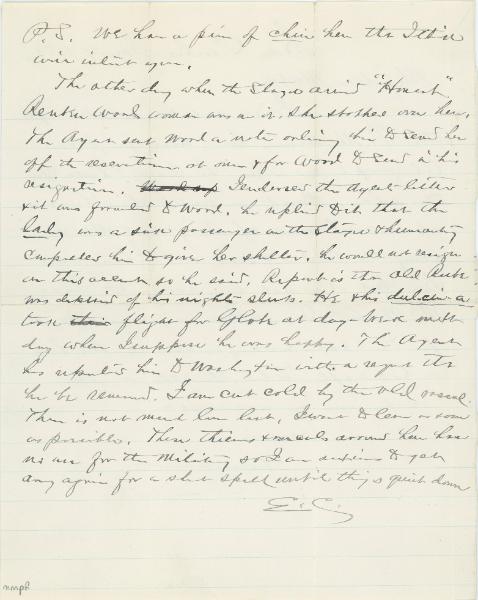 Click on an image to enlarge
Captain Emmet Crawford ALS, 2pp front and back , San Carlos, June 7, 1882. "My Dear Morton, I will not leave until after the P. M. arrives here, will you please telegraph me when he leaves there for this place. I wish you would also hunt me up a good map of Arizona and Mexico along the border and send me. I have one here but it is not very accurate. Tell Mrs. Monton Davis
and I am very much obliged for the apples and oranges sent us. We had a hot apple toddy the other night. Hope you are well. & I remain, Yours sincerely, Crawford.

P. S. We have a piece of china here that I think will interest you. The other day when the Stage arrived "Honest” Reuben Wood’s woman was on it, she stopped over here, the agent sent Wood a note ordering him to send her off the reservation at once and for Wood to send in his resignation. I endorsed the agents letter and it was forwarded to Wood. He replied to it that the lady
was a sick passenger on the stage and humanity compelled him to give her shelter, he would not resign on this account so he said. Report is that old Rube
was deprived of his nights sleep. He and his dolchen took flight for Globe at day break next day where I suppose he was happy. The agent has reported him
to Washington with a request that he be removed. I am cut cold by the old rascal. There is not much love lost. I want to leave as soon as possible. These thieves and rascals around ere have no care for the military so I am anxious to get away again for a short spell until things quite down. E.C. "

Note: Reuben Wood was appointed post trader at San Carlos in 1879 only to be charged with selling powder to Indians. Thus Crawford’s description of Wood as "Honest” Reuben Wood.

Crawford enlisted in the 71st Pennsylvania Infantry, fighting as part of the Army of the Potomac, including the Battle of Antietam and the Battle of Fredericksburg. He was WIA at the Second Battle of Fredericksburg. During recovery he attended the first officer training school designed to train white officers assisgned to command U. S. Colored Troops. He returned to duty in
time to be mustered out with the rest of his regiment. He and his two brothers reenlisted in the 197th Pennsylvania Infantry. The war’s ending found him
assigned to the 13th Colored Artillery in Bowling Green, Kentucky. He was most noted for his time spent in the Arizona Territory under General George Crook in the U. S. Cavalry. He was killed in pursuit of the Apache leader Geronimo in January 1886 in Mexico.
Shipping Weight: 0.25 lb
Item # 19483
$1,495.00 USD