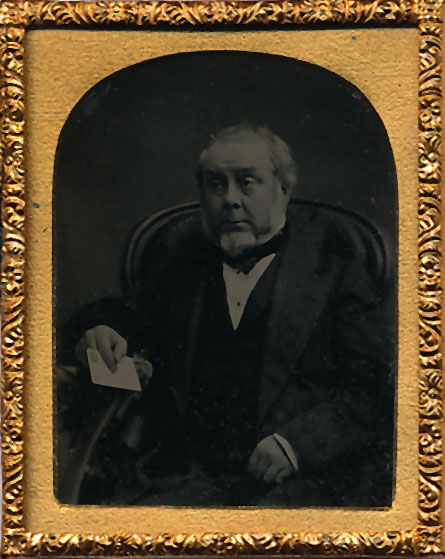 Click on an image to enlarge
Schenck, Robert C., major-general, was born in Franklin, Warren county, Ohio, Oct. 7, 1809. He was graduated at Miama university in 1827, remained there three years as a tutor in French and Latin, studied law, and was admitted to the bar in Settling in Dayton, Ohio, he soon acquired a large practice, and entered political life as a Whig. In 1838 he was defeated as a candidate for the legislature, in 1840 stumped the state for William Henry Harrison in 1841 was elected to the legislature, and in 1842 was re-elected to the legislature and also elected to Congress. In Congress he rendered conspicuousservice both on the floor and in several committees to which he was appointed. He was re-elected three times serving from 1843 to 1851, and during 1847-49 he was chairman of the committee on roads and canals, and had the opportunity for carrying out some of the plans he had formed for the internal improvement of several commercial sections in the western states. In 1850, he declined a renomination for Congress, and in 1851 was appointed United States minister to Brazil.

During his two years residence in South America he negotiated commercial treaties with the states bordering the La Plata river, personally visiting Buenos Ayres, Montevideo, and the Uruguay, Paraguay, and Parana river regions. Returning to the United States in 1853, he resumed professional practice and was engaged in the management of the Fort Wayne railroad till the beginning of the Civil war. When the first call for volunteers was made, he offered his services to Gov. Dennison, and was appointed a brigadier-general of state militia. Onreaching the field he was placed in command of all the Ohio troops in eastern Virginia, and had his first encounter with the Confederates at Vienna June 17, 1861. Soon afterward he was transferred to western Virginia, where he aided Gen. Rosecrans in driving the Confederates from that department.

In the spring of 1862 he succeeded Gen. Lander in command at Cumberland, Md., on June 8 he commanded the right of Gen. Fremont's army in the battle of Cross Keys, and during the interval between Gen. Fremont's relief and Gen. Sigel's assumption of the command of the 1st corps of the Army of Virginia Gen. Schenck was its commander. On Aug. 30, he was wounded in the second battle of Bull Run and had to retire from the field and on Sept. 18 he was promoted major-general United States volunteers, his commission dating from Aug. 30.While on disability leave he was again elected to Congress as a Republican, where he was appointed chairman of the committee on military affairs, and, resigning his commission in the army, was re-elected to Congress in 1864, 1866, and 1868, and defeated in 1870. In 1870 he was appointed United States minister to England, but before departing he served by appointment as a member of the joint high commission, which resulted in the treaty of Washington, the Geneva arbitration, and the settlement of the "Alabama" controversy. While he was in England a charge was preferred against him of complicity in the celebrated Emma mine fraud, and as a result of such charge he resigned his position and returned home to appear before a committee of investigation. He was completely exonerated by the committee, but never re-entered public life, and he died in the city of Washington on March 23, 1890.
Shipping Weight: 0.25 lb
Item # 21124
(Sold)