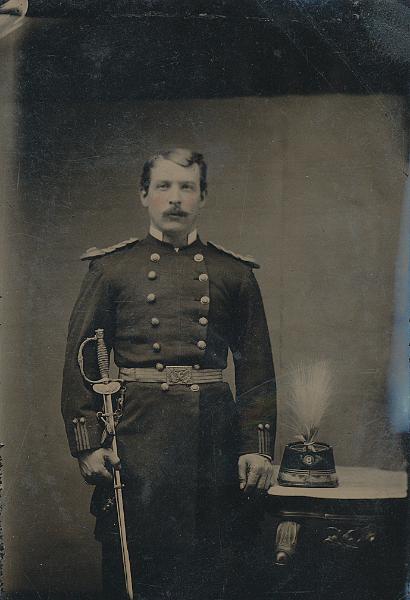 Click on an image to enlarge
Indian Wars Major Officer with Staff Officer Sword CDV-sized tintype of a soldier in uniform. His hat (9th Infantry) sits on a nearby marble-topped table. The 9th US was a hard fought Indian fighting unit.

Following the reorganization the 9th Infantry performed garrison duty at various posts and guard duty on the Union Pacific Railroad line. In May 1873, six companies, A, D, E, F, H and I, were sent to the
Department of Dakota for duty with the Yellowstone Expedition, escorting the engineers locating the Northern Pacific Railroad. From the summer of 1874 to May 1876, the regiment was stationed at posts on or near the Sioux reservation in Nebraska and Wyoming and was almost constantly escorting wagon trains. In the summer of 1875 Companies C, E and H, were in the Black Hills, Dakota, as part of the escort to the Newton–Jenney Party, Company E remained in the field until November assisting in ejecting white intruders who had entered Sioux territory.

In May 1876, Companies C, G and H became a part of the Big Horn and Yellowstone Expedition under command of Brigadier General Crook and were in the field until late in October taking part in the engagement with the Indians at Tongue River, Montana, 9 June, the
Battle of the Rosebud, and the Battle of Slim Buttes. Companies G and H also assisted in repelling a night attack by Indians on the camp on Goose Creek, Wyoming, 9 July 1876. In the early part of September the entire command was without rations for a number of days, and subsisted on horse flesh and a small quantity of dried meat and fruit captured at SlimButtes. In October, 1876, the Powder River Expedition was organized and Companies A, B, D, F, I and K formed
a part of it. They remained in the field until January 1877, during the most severe part of the winter, and practically brought to a termination the Great Sioux War of 1876.

In July 1877, Companies B, D, F, H, I and K were a part of the force sent to Chicago, Illinois, at the time of the Great Railroad Strike of 1877. They remained a month performing guard duty over various public and private institutions.

During the summer and fall of 1878 Companies B, C, H and I were a part of a force of observation on the Little Missouri River, and in the northwestern part of the Black Hills.

In October 1878 Companies G and K were part of the force in the field in the Cheyenne War. Company K was mounted and took active part in the pursuit.

In October, 1879, Companies E and K went into the field in the White River War, remaining until July 1880.

In 1883, Col. John S. Mason, took command of the 9th Regiment and in July 1886, the regiment went to the Department of Arizona. During their service there the regiment was in garrisons at every post in Arizona and at some posts in New Mexico. Four companies, C, E, H
and I, were in the field in New Mexico for about amonth during the Apache campaign of 1886 against Geronimo.

Following the end of the Indian Wars the regiment participated in the Spanish–American War. It fought in the Battle of San Juan Hill.
Shipping Weight: 0.5 lb
Item # 18307
$175.00 USD